Assassin’s Creed IV Black Flag is a 2013 action-adventure game, and the sixth main instalment in the Assassin’s Creed series. A sequel to 2012’s Assassin’s Creed III, the game has the player take on the role of an Abstergo Entertainment research analyst as they explore the story of Edward Kenway – father to Haytham Kenway, grandfather to Ratonhnhaké:ton, and an ancestor of Desmond Miles.

Assassin’s Creed appears as one of the action game franchises that has succeeded in setting new standards in the gaming industry. A well-built historical setting, future and past plots that move in a neat plot, and a combination of parkour moves that are capable of growing into an identity that cannot be separated from this one flagship Ubisoft franchise.

Besides the changes in the story in each series released over the last few years, Ubisoft also tries to provide various innovations in the gameplay to prevent repetitive impressions that are considered vulnerable. All of these innovative efforts were finally successful with the arrival of Assassin’s Creed IV: Black Flag.

Indeed, there are many reasons to look forward to the presence of this game. Apart from the unique pirate theme, the fact that this will be the first “stand-alone” series after the end of Desmond Miles’ story in the third series does open up the potential for new story directions to be exploited by Ubisoft itself. An epic naval battle, with Assassin traits and a much more massive world. 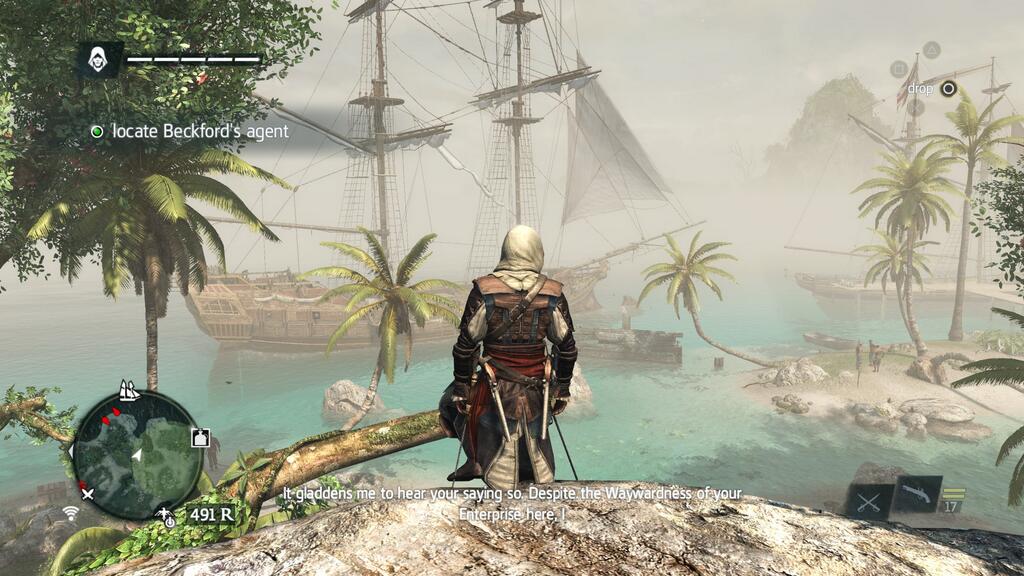 Templars and Assassins, two camps with opposing ideologies are indeed still the cogs for the story for every new journey offered by the latest series Assassin’s Creed. The Assassin was positioned as a balancing force and the sword of truth who was ready to subdue the Templars’ obsession to create absolute order, where freedom was not an important part at all. This sacred mission is carried by every individual who gives up his life as an Assassin. But not with Edward Kenway.

Edward Kenway is not a legit Assassin. Cruising the seas as a lower class worker, the opportunity to achieve a more successful life and be flooded with gold is wide open after Kenway wins the battle against a defector Assassin who is on a mission for a Templar, a mission that has the potential to produce a heavier bag of gold for him.

Taking the Assassin’s clothes and disguising himself, Kenway’s ambition opens up a bigger mystery. The key he gets will increase the Templars’ potential to find the Observatory – a technology that allows individuals to track and locate anyone around the world. However, in order to find this place, the Templars had to find someone known as “Sage”.

The uncovered fake identity didn’t necessarily make Kenway give up. The information he got from the Templars made him even more ambitious to find the Sage and the Observatory, not for his idealism to save the world, but for its potential as a source of extraordinary gold. It was this instinct and greed that shaped his identity as a pirate and drove Kenway’s journey across the ocean.

In this “holy” journey, Kenway is also trying to build a city of dreams – Nassau, a pirate town where freedom is the main charm, a city where colonial governments like England and Spain do not have any influence, and famous pirates like Blackbeard and Charles. Vane began to create their respective identities. Unfortunately, this journey itself is fraught with so many obstacles.

If you want to know more about Assassin’s Creed IV: Black Flag, now play this game and get the best experience of the best pirate games ever.