Astroneer is an adventure game developed by System Era Softworks. This game was released through early access in December 2016 before a full release in 2019. The player is tasked with creating structures, colonizing planets, and collecting resources. Astroneer has no set goal or storyline, though each planet holds challenges for players to complete. In this game, the player will explore 7 different procedurally generated Planets such as Calidor, Sylva, Glacio, Vesania, and Atrox. Moons such as Novus and Desolo. Each planet comes with their own unique Biomes, Type, and Hazards.

Astroneer is definitely a water-cooler sort of game. It feels like it’s designed with co-op in mind, or at least a big online community, so you’ve got someone else around to help you figure it all out, or at least to cart raw materials back to base while you sit there puzzling over a new machine. When you played it alone (singleplayer), you often felt like you were trying to put together a complicated model kit without its instructions.

Astroneer is set during the 25th century’s Intergalactic Age of Discovery, where Astroneers explore the frontiers of outer space, risking their lives in harsh environments to unearth rare discoveries and unlock the mysteries of the universe. Players can work together to build custom bases and vehicles and use terrain to create anything they can imagine. A player’s creativity and ingenuity are the keys to thriving on exciting planetary adventures! 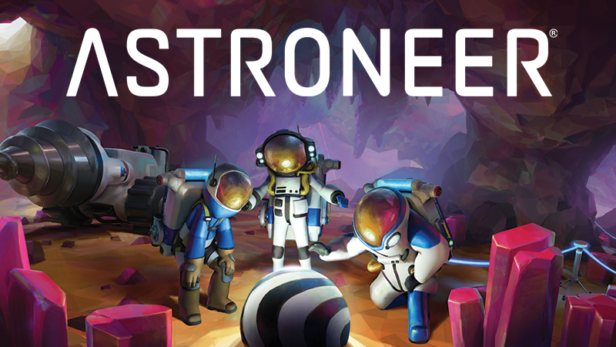 Craftable items include rovers, space shuttles, buggies, storage silos, research chambers, atmospheric condensers,, component smelters, batteries, solar panels, generators, and turbines. For example, ammonium can be converted into hydrazine fuel for an astroneer’s spacecraft. It can be used in its raw form to create a limited-use thruster. When low on oxygen, the astroneer recharges by staying near craftable tethers, which can be chained over long distances to prevent suffocation. As of the game’s full release, an “oxygenator” is required to provide an extended reach of oxygen when tethering.

Every astroneer has a Terrain Tool. It allows the player to reshape the landscape and gather resources . The resources, such as organic material, lithium, quartz, resin, and ammonium, are neatly packaged by the Terrain Tool into convenient stacks. These stacks can be snapped into slots on the astroneer’s backpack, research chambers, storage units etc. Certain resources, such as clay or titanite can be combined or smelted into more advanced materials. The astroneer also has the option to research and craft upgrades to the Terrain Tool, which can be plugged and unplugged at will.

It is different from the Terrain Tool, the Backpack is the astroneer’s main tool. The Backpack functions as the player’s inventory and HUD, with eight storage slots, two quick-use slots, a basic 3D printer, a built-in oxygen tank (shown as a horizontal blue bar), and a small internal power supply (shown by a column of yellow segments). The Backpack also contains the Research Catalog, which can be used to unlock new crafting blueprints.